Looks like the legal battle between the management of private institution, Madonna University and parents of the 6 students of the institution detained for 7 months in prison custody for criticizing the school on social media might be going on for a long time, as they’ve vowed not to apologize to the school authority over their wards’ action. 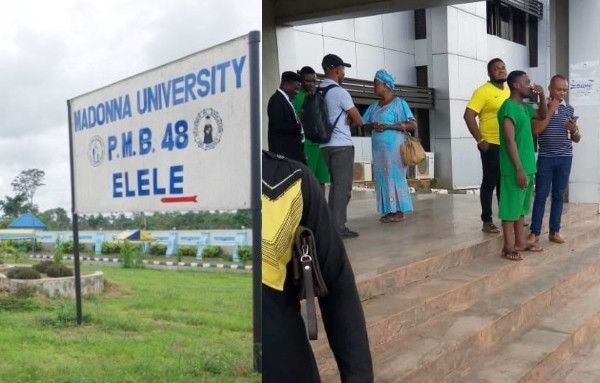 Speaking on behalf of the parents on Thursday October 3rd, Mr. Christopher Onyejekwe stated that they had an agreement with the university’s management to withdraw the lawsuit.

“Sequel to the meeting we had with Very Rev. Fr. Dr. Ralph Madu, the Deputy Vice Chancellor of Madonna University; the Registrar of Madonna University and the Rector of the Saviourite House of Formation, Fr. Dr. Oliver Udaya, on 24th day of September 2019 at Assumpta Cathedral, Owerri, we, the accused persons of a case before the Federal High Court Awka with suit No: FHC/FHC/C/03/2019 decided to give peace a chance.

“We also took into good view the concerns of many Catholic Bishops, especially Most Rev. Paulinus Ezeokafor of Awka Diocese and Most Rev. Hilary Okeke of Nnewi Diocese.

“We realised that giving peace a chance will be in the best interest of the image of the church, the image of Madonna and decided to settle the matter at a roundtable.”

However he said when the agreement was presented to the founder of the University, Rev. Father Edeh, he insisted that the parents must tender individual apologies to the school.

“We were optimistic that the voice of reason would prevail; but when the resolution of our meeting was presented to the founder of the university, Rev. Father Edeh, he asked us to tender individual apologies to the university.

“Why should we tender apologies to him for detaining our children in prison for seven months and ruining their career?” Onyejekwe added.

When Punch’s correspondent reached out to the Deputy Registrar of the university, Mr. Charles Njoku to comment on the parents’ decision, he revealed that he was sacked without any reason.

“I can’t react. They have just sacked me from the university without any reason given to me. I’m in my house” he said.

Asked whether his sacking had anything to do with the students’ matter, Njoku said, I don’t know. They didn’t give me any reason for my sack.”

#BBNaija: Kiki Osinbajo responds to IG user who criticized her for campaigning for Seyi