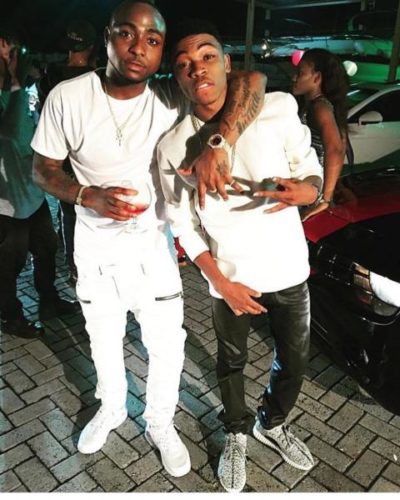 Davido has taken a swipe at the Warri man that promised to deal with his signee, Mayorkun for allegedly not attending a show he was paid for.

In a video that has been making rounds on social media, the unidentified man called out the “Up to Something” singer for failing to show up at event that was to happen on the 14th of February, 2020. The man revealed that the singer was paid in full and is yet to refund the money even after failing to show up. He threatened to beat up the singer if the money is not paid back in the next 48 hours.

Davido has, however, reacted to the man’s claims with a hilarious but threatening message. The Warri man happened to be wearing a shirt punctured with a few holes and the “Risky” singer promised to add more. He wrote: “Lol cap … be like this one hole for him shirt never complete”

Lol cap … be like this one hole for him shirt never complete.

Man promises to beat up Davido’s boy, Mayorkun, says he’s banned from performing in Warri
.
According to him, Mayorkun was paid heavily to perform on the 14th of February in Warri, but he refused to show up as agreed. .
.
Now Dem Wan Beat Am Collect The money cc @Gidi_Traffic

How an old woman I was trying to help called me a ritualist – Actor, Okiemute Mrakpo…

Photos and Video of Chioma partying with Davido, Mayorkun, others, 5 days before she…